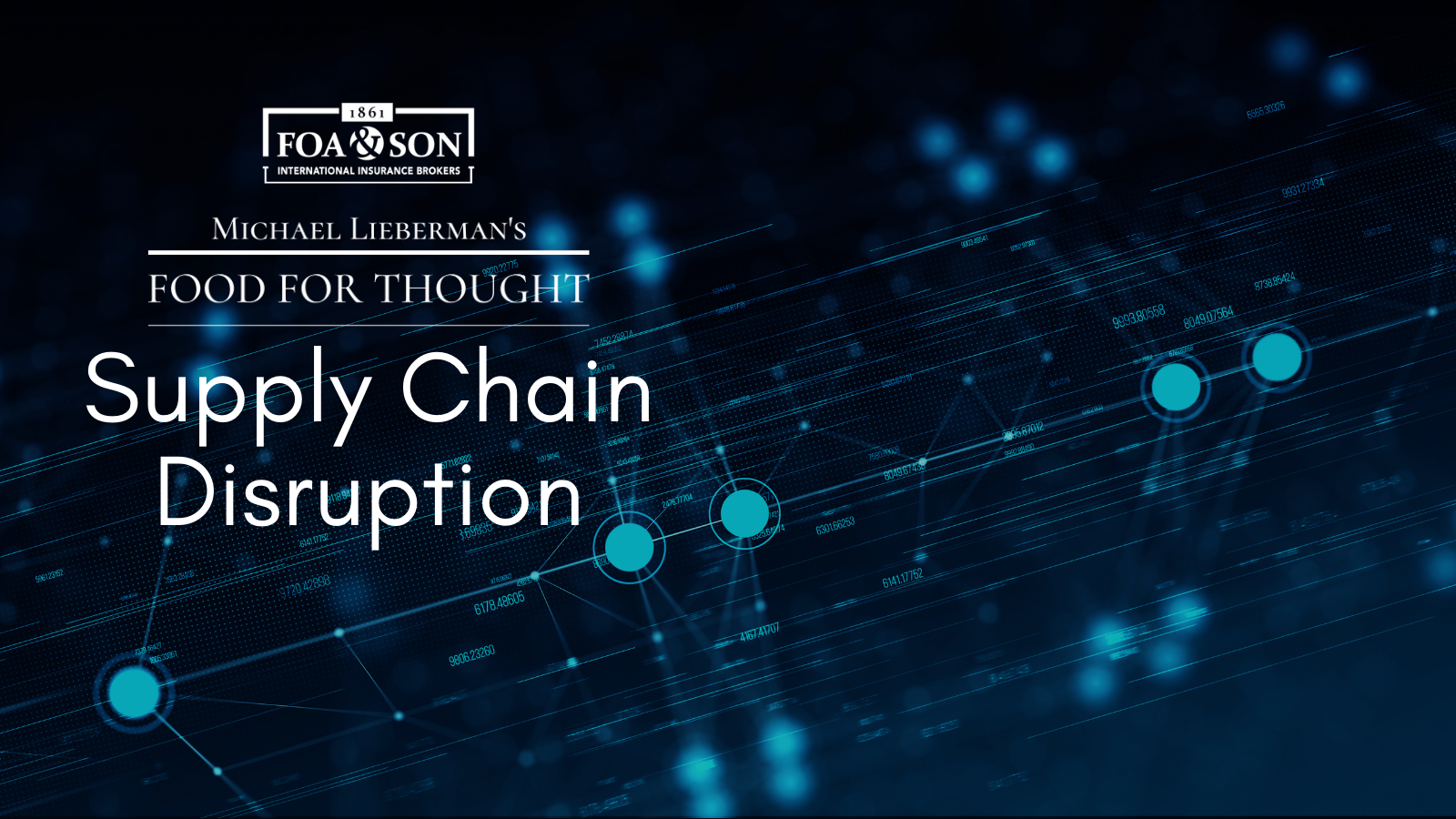 In the wake of COVID-19, few industries were left unaffected. The Food & Beverage space is no exception. The global pandemic, and its impact on food and beverage supply chains, was the focus of discussion during a recent episode of Foa & Son Food & Beverage Practice Leader Michael Lieberman’s webcast, FOOD FOR THOUGHT.

“It was just this shock to the system,” said Greg Wank, Lieberman’s guest and an accounting and advisory partner at Anchin. “The supply chain was disconnected from where the demand suddenly was going to come from.”

Wank described delays due to pandemic-related workplace safety issues. He then went on to cite the sudden shift to home delivery spurred by the early quarantine shutdowns: “There was the immediate kind of consumer behavioral change that happened almost instantaneously.”

As the leader of Anchin’s food and beverage industry practice, Wank brings an insightful and valuable point of view to this subject. His conversation with Lieberman was wide-ranging, but COVID-19 loomed large as the source of many of the issues they touched upon.

In the immediate aftermath of the 2020 shutdowns, Wank explained, retailers were understanding about distribution shortages. But “eventually the customer loses patience,” he said. “Not just that they’re losing patience with you — it’s just that they’re losing business.” However, Wank went on to note, many Anchin clients who lost distribution to major retailers were able to make up for it with online sales.

In response, Lieberman pointed out that companies, such as consumer-packaged goods companies, could turn the memory of pandemic-era disruptions to their advantage at the negotiating table. CPG companies could “share that recovery plan almost as a competitive asset when they’re trying to make a sale to these retailers,” Lieberman suggested. “Retailers are going to want to know – ‘Hey, if we’re faced with shortages again, and we still need that product, what’s your plan?'”

Lieberman went on to ask Wank what lessons his clients have learned from the pandemic. “People’s number one takeaway: How vital your team is to your success,” replied Wank. “They learned that in spades when this all went down. Number two,” he continued, “their surrounding advisor universe.”

The third lesson learned by Wank’s clients during the pandemic? “The power of direct-to-consumer as a portion of your business,” Wank concluded.

Lieberman queried Wank on COVID’s impact on manufacturers, co-packers, and companies who rely on foreign suppliers. In his answer, Wank dissected the impact on the workforce, manufacturing procedures, demand, and investment. The conversation then turned to expenses, such as packaging cost, as well as pricing and inflation.

“The takeaway again comes back to communication,” Wank summarized. “Lean in to your people, lean in and out to your advisors and your investors and your suppliers and your customers and your competitors.” In the vacuum created by the absence of trade shows, said Wank, it’s important to find other ways to facilitate interactions. “And hopefully we’ll all be back together soon.”

In following FOOD FOR THOUGHT tradition, Lieberman closed out the episode by surprising Wank with a gift based on his favorite food. “You told me about this Italian restaurant,” Lieberman began. “You told me about the Chilean sea bass that you order.” As an aficionado of Chilean sea bass himself, Lieberman knew just where to turn: Mark Foods. They are “the leading U.S. importer of MSC-certified Chilean bass.”

Wank shared footage, filmed by his wife, of himself receiving the surprise gift in his home. “Chilean sea bass,” Wank proclaimed in the footage, a smile spreading across his face. “Now we have to cook it.” His wife was quick to correct Wank’s choice of pronoun: “Now I have to cook it.”

This episode of FOOD FOR THOUGHT held one more surprise in store. Just as Lieberman and Wank wrapped up their conversation and said goodbye, they were “Zoom bombed” by the sudden appearance of Siddhi Ops founder and former FOOD FOR THOUGHT guest, Melissa Facchina.

Facchina broke into the stream using sophisticated hacking technology (for more on cyber security click here). And why? All to offer a few kind words to Lieberman and Wank. “Both of you have been instrumental, frankly, in helping both Siddhi Ops grow as a business,” she said. “So thanks for all the efforts, sincerely. Both on behalf of the Siddhi family and all the businesses that we support along the way.”

To continue the conversation on supply chain disruption, reach out to Michael Lieberman here.