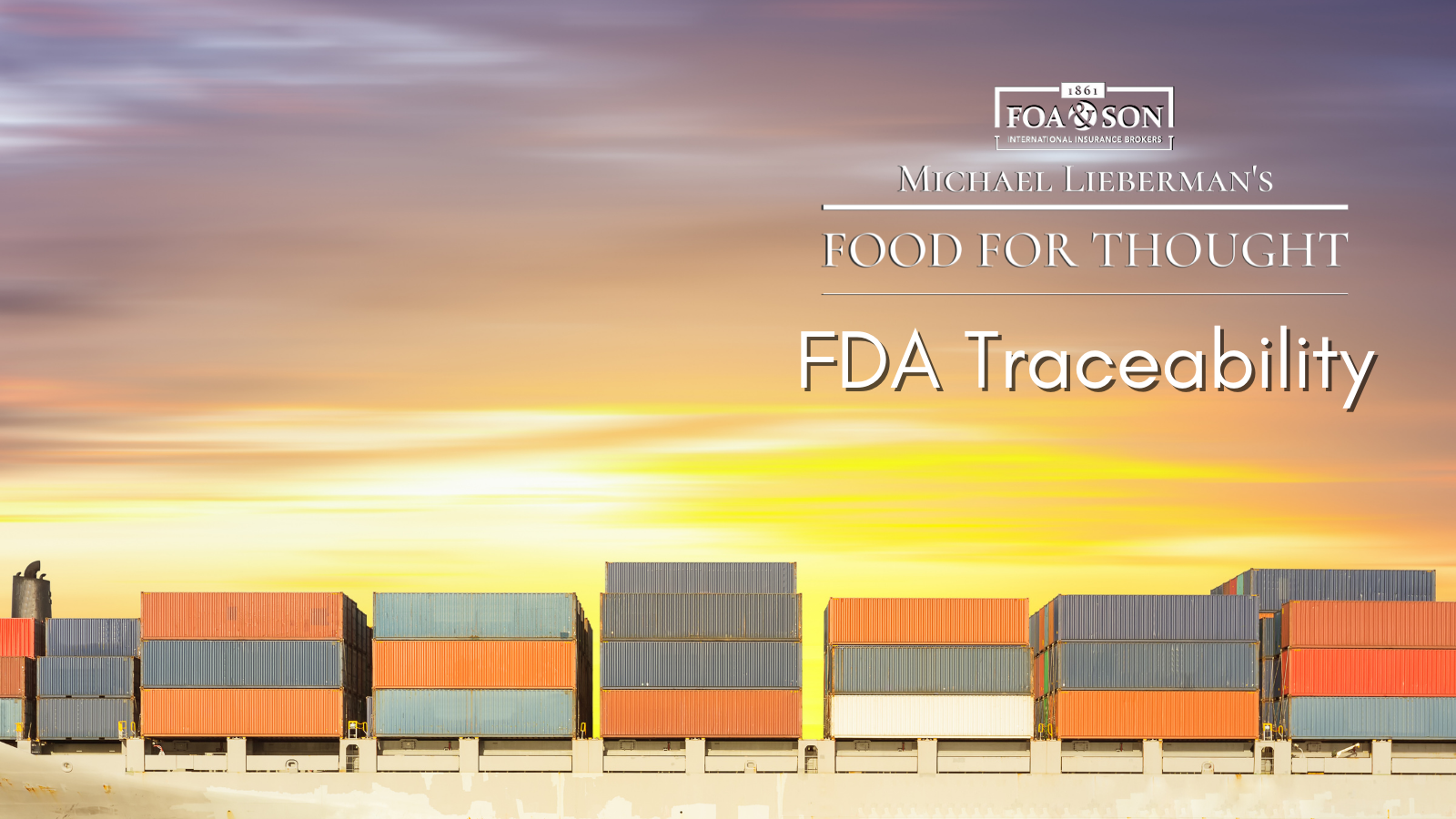 “It’s not your supplier’s responsibility,” said Dana Bartholomew of Legit Fish during a recent episode of FOOD FOR THOUGHT. “Everybody in the supply chain has to take ownership of how they’re handling the product,” he continued. “How are they bringing solutions to the customer? This is a wave. It’s a tsunami of food verification, traceability, and digital connection of the supply chain nodes. It’s happening. It’s coming at us. So you gotta be ready.”

Bartholomew was speaking to host Michael Lieberman during the seventh episode of the monthly webcast, which debuted in April. On FOOD FOR THOUGHT, Foa & Son Food and Beverage Practice Leader Lieberman sits down with a guest each month to discuss issues impacting the industry. His conversation with Bartholomew centered on FDA traceability compliance, and data-driven traceability solutions. As Executive V.P. of Business Development for Legit Fish and a seasoned sales executive with over 20 years of managing high performing teams in the seafood industry, his insights made for a compelling conversation.

In 2011, the FDA’s Food Safety Modernization Act (also known as FSMA) was passed into law. Since then, different portions of that law have been rolled out. Currently, the food industry is tackling the FDA’s proposed traceability rule. What can companies do now to become compliant, and how can technology be leveraged to help?

These questions and more were answered during Lieberman and Bartholomew’s wide-ranging discussion. They began by exploring what specific problems the proposed regulation aims to address. “In terms of seafood,” Bartholomew explained. “It’s fraud, it’s illegal fishing, it’s transshipment of products from country to country without verification of origins.”

“With this FDA proposed rule,” he continued. “It’s requiring that farmers and vessels and anybody participating in the supply chain have to be able to trace and verify back to the source.”

Lieberman brought up blockchain, a record-keeping technology that stores data in blocks that are then chained together. “Is blockchain part of the solution?”

“Short answer,” replied Bartholomew, “is anybody participating in solving these problems is part of the solution.”

“We’ve been hearing blockchain was going to be the silver bullet,” Bartholomew went on. “It solves some of the problems, but there’s some challenges. One is, it’s a whole new language. It’s new technology. In many cases, the participants in the seafood supply chain are not fully digitized. They don’t have electronic connections to all of their data and their product. So that’s a challenge. And the other thing is, blockchain is only as good as the information that enters the beginning part of the chain.”

Knowing that Lieberman is also a fan of the television show ‘Ozark,’ Bartholomew made a droll comparison between blockchain and the show’s fictional Navarro drug cartel. “You and I both use a bank, right? I know where my money’s coming from. You know where your money’s coming from… with Navarro, don’t really know.”

“Mistakes happen. But once it’s in the system, it can’t be altered,” Bartholomew explained. “You can have a fat thumb. If you hit two zeros instead of one zero, that’s a mistake. And if I, as a second receiver of that data, confirm it, guess what? That’s locked and loaded for all time.”

Lieberman then queried Bartholomew on how claims on seafood packaging can be verified by the consumer. “Without a true digital connection to the source,” Bartholomew answered, “it’s very hard to tell.”

As the conversation continued, the two discussed new ways of thinking about traceability, non-seafood scenarios, and technologies that can make a difference, such as Legit Fish.

“With Legit Fish,” Bartholomew began, “We are a patented technology that is verifying and authenticating the origins of seafood, the provenance of seafood. And the key thing is–it is tied to federal government state local records. So it’s the rigor, and the verifying of the data that is being captured from water to plant to value-added, then into the marketplace.”

Pressed for a closing statement, Bartholomew provided action items for companies wishing to ensure traceability compliance–and to deliver the value to their customers. “It has to be a top-down structural, organizational, cultural shift,” he said. “I’ve been in the business for over 30 years, and this is a major transformation. So that’s what I would say: get engaged and learn.”

To continue the conversation on supply chain disruption, reach out to Michael Lieberman here.