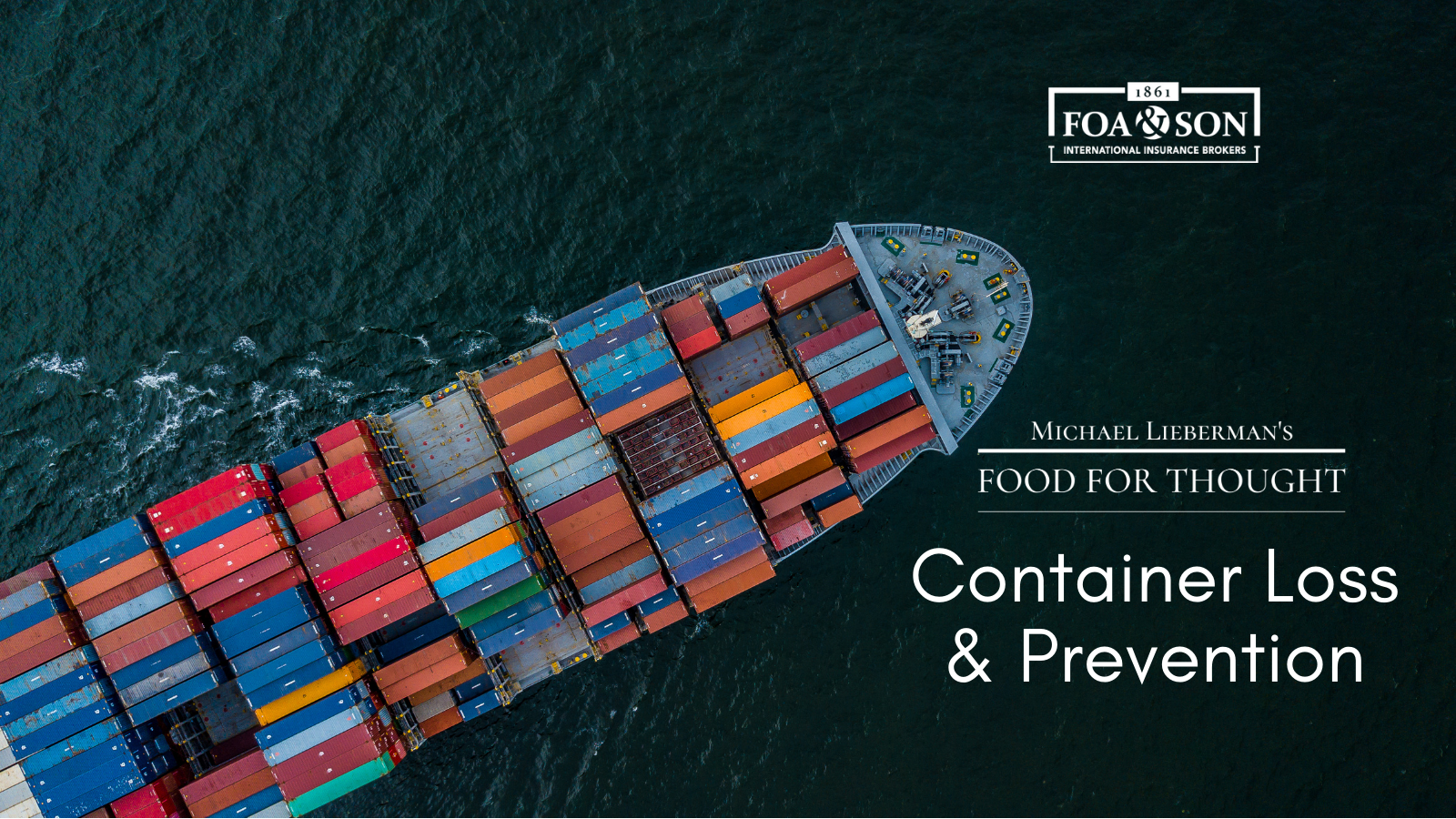 “When the Covid pandemic started, I thought lots of bad things were going to happen,” said Michael Hird of WK Webster during a recent episode of FOOD FOR THOUGHT. “I didn’t actually think that containers were going to fall off ships as a result of Covid,” he continued. “But essentially that’s what we’re seeing here. All of these things are connected.”

Hird was talking to host Michael Lieberman during the fifth episode of the monthly webcast, which debuted in February. On FOOD FOR THOUGHT, Foa & Son Food and Beverage Practice Leader Lieberman sits down with a guest each month to discuss issues impacting the industry. His conversation with Hird centered around the seeming uptick of container losses, such as the dramatic MV ONE Apus loss. That loss, and others involving the same North Pacific route, have raised questions. What is the reason behind the uptick? How is the shipping industry addressing it? And what do owners of goods need to know?

In their wide-ranging conversation, Lieberman and Hird sought to get to the bottom of these questions, and more. As a director at WK Webster, and head of its Casualty and Recoveries departments from the UK, Hird’s insight in this area is valuable and sought-after. Prior to joining WK Webster, Hird spent over 20 years at one of the international group P&I Clubs, where he was a director, partner, and head of claims. His wealth of experience extends over a broad range of liability areas. Further, WK Webster is a leader in the field. The agency has been offering marine and transit claims and consultancy services worldwide since 1861 — the same year Foa & Son was founded!

“That works out to about 320 years of combined marine cargo experience,” Lieberman noted wryly.

During their discussion, Lieberman and Hird attempted to pinpoint possible causes for the uptick in cargo losses. Lieberman queried Hird on steps that liners are taking to avoid such losses. “Does it go back to just being smarter about moving around these storms,” he asked, “or are they going to start shrinking the stack size?”

They also discussed the economic impacts of the Covid-19 pandemic. “We’ve also seen a shortage in containers,” Lieberman pointed out. “We’ve seen a recirculation of what I would classify to be older equipment coming back into the scene to make up for those shortages. Do you believe that plays a role in any of what we’re seeing today with these container losses?”

“Yeah, absolutely,” responded Hird. “In fact, everything you’ve just mentioned, all of these things are interrelated, right?”

As the conversation shifted to the ONE Apus situation, Hird described how the normal process of discharging containers is complicated by a stack collapse. “You need slings and chains to get them through the corner castings or underneath the containers,” Hird said. “A lot of the containers are completely damaged, the floors will fall out the side walls, everything will start to fall to bits.”

The two then went on to discuss General Average, and the costs associated with a declaration. Finally, they turned to preventative measures that can be taken pre-shipment.

“The first thing,” Hird explained, “is to check quite carefully the condition of the container as it’s delivered to you for loading. It sounds obvious, but so often it’s not done well.” He went on to provide a detailed description of how to conduct a container inspection, offering specific tips on what to look out for. He continued by discussing the importance of securing cargo, and temperature control.

“This is a subject matter in itself, frankly,” Hird said of refrigerated cargo. “Isn’t it, Mike?”

“It sure is,” Lieberman answered.

“I mean, we could talk about this for an hour just by itself.”

In following FOOD FOR THOUGHT tradition, Lieberman closed out the episode by surprising Hird with a gift based on his favorite food.

“Knowing that you’re a fan of Italian food, we reached out to Eataly,” Lieberman explained. “Eataly is pretty much the paradise when it comes to Italian food. They have locations all around the globe. And Michael, we learned from Eataly that they are opening a brand new location in London, so you are going to be one of the first, if not the first, to receive an Eataly gift card to use at that London location!”

“Well, thank you very much,” said Hird, visibly pleased. “Thank you to you. Thank you to them. And it’s been my pleasure today to talk to you about these things.”

To continue the conversation on container loss prevention, reach out to Michael Lieberman here.